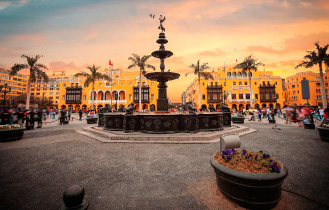 Welcome to Lima, The City of Kings, a city full of history and cultural heritage. Travel with us around Lima and visit the great convent of Santo Domingo where here the relics of three saints are kept: Santa Rosa de Lima, San Martin de Porres and San Juan Macias. As well as, we will know the most turistic districts of Lima and the Historical Center.

Price per person
in a double room

DAY 1
Assistance upon arrival in Lima and transfer to the selected hotel.
In the afternoon, our tour presents Lima in its three historical periods: pre-Hispanic, colonial and modern.
CONTEMPORARY LIMA: We will visit the most traditional residential areas of Lima, El Olivar de San Isidro, Miraflores and Larcomar.
ANCESTRAL LIMA: We will make a panoramic view of the "Huaca Pucllana", a magnificent ceremonial and archaeological center built in the 4th century AD. and considered "Sacred Town" by the Incas.
The viceroyalty of Peru was the most important of the Spanish Empire and Lima was its capital.
COLONIAL LIMA: We visit the Historical Center of Lima, where you will appreciate more than fifty monuments and colonial buildings, highlighting the Paseo de la Repû¤blica, Plaza San MartûÙn, the Plaza Mayor, the Government Palace, the Archbishop's Palace, the Cathedral Basilica, the Municipal Palace among others.
We visited the CONVENT OF SANTO DOMINGO
We will enter one of the most important convents of the seventeenth century. Where the relics of the three Peruvian saints Santa Rosa de Lima, San Martin de Porres and San Juan Macias are conserved.

DAY 2
Breakfast
In the morning we will start the visit to our Sanctuary of Pachacamac
ORACLE OF PACHACAMAC
Guided visit to the splendid Pachacamac Citadel, sanctuary of the God Pachacamac, creator of the universe for the ancient Andean towns.
The citadel includes temples, pyramids and palaces. They emphasize the "Temple of the Sun", the "Temple of Pachacamac", the "Acllahuasi" or "Palace of the Virgins of the Sun", among others. The whole place was considered sacred and part of the mystical axis of the world.
BARRANCO AND VANTOS PANTANOS
Our tour includes a visit to the traditional and bohemian district of Barranco, where the famous Bridge of Sighs stands out, continuing along the Salto del Fraile, the Pantanos de Villa and enjoying spectacular views of the Pacific Ocean.
Accommodation night

Prices per person in US dollars
Rates subject to availability previous confirmation of the reservation.
Valid to pay in cash, via transfer or Cash Payment.
Non-refundable, non-endorsable and non-transferable package.
Any incident presented at the hotel or in the transport is important to leave it registered at the destination. Then on your return inform the agency to proceed with the respective inquiries.
If you require an invoice, it is important to detail the ruc number, commercial reason and address when the reservation is requested.
HOTEL INFORMATION
The admission schedule may vary according to the season and occupation of the hotel.
Check in 15:00
Check out 12:00
Some hotels have connecting rooms, family rooms, superior rooms and special services, request the quote from the sales executive.
Always consult for the maximum number of people allowed for each type of room required.
Rates only valid for the detailed dates above.
Referential exchange rate in soles S /. 3.40.
Exclusive rate for foreigners.