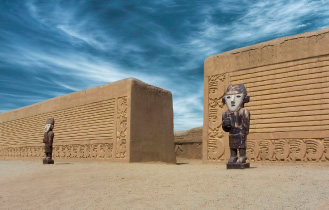 We will start in Lima. Then the trip will continue to the "city of eternal spring", Trujillo, where we will be enchanted by its mysterious archaeological remains and beautiful beaches. Finally, we will explore the city of Chiclayo and its archaeological vestiges.

Price per person
in a double room

DAY 1: LIMA.
Arrival in Lima, assistance, and transfer to the hotel. Accommodation in Lima.
Meals: None.

DAY 2: CITY TOUR LIMA COLONIAL & MODERN/TRUJILLO.
In the morning visit the most important sites of Lima and wrap yourself in its charm and tradition. Visit the impressive historical center and go through by the Main Square, The Government Palace, City Hall, The Archbishopâ€™s Palace and the Cathedral. You will visit the most representative Convent in Lima that displays the largest monumental group of Colonial Art found in America, here you will see and explore the architectual set of religious buildings.
Finally, take a tour through the financial and residential San Isidro district and enjoy an excellent view of the Pacific Ocean from Miraflores, the most touristic district of our city, return to the hotel and transfer to the airport to board your flight to Trujillo. At your arrival, transfer to the hotel.
Accommodation Trujillo.
Meals: Breakfast.

DAY 3: TEMPLES OF THE SUN AND THE MOON, CHAN CHAN ARCHAEOLOGICAL SITE & HUANCHACO.
Make an interesting tour of the most important archaeological sites in Trujillo and finish this adventure in the peaceful and traditional Huanchaco.
Located in Moche, between the countryside and the desert, you will find the Temple of the Sun, built with more than 100 million adobe bricks and currently stands at a height of 45 Mts Here we can see the Huaca de la Luna a beautiful temple divided into 6 buildings, one above the other.
Then, visit Chan Chan Archaeological Complex, spread over a wide area, it was the center of the Chimu Empire, and it is the largest Pre-Columbian adobe city that has existed on the continent.
Finally, gaze a wonderful view of the sea from the traditional beach of Huanchaco also known for their typical boats called Caballitos de Totora. Accommodation in Trujillo.
Meals: Breakfast.

DAY 4: EL BRUJO ARCHAEOLOGICAL COMPLEX & CAO MUSEUM/CHICLAYO.
Get surprised with the archeological wealth of Trujillo and go through extensive fields of sugar cane until arrival to El Brujo Archeological Complex. Learn about the three Huacas (temples) that make up this site: Huaca Cao Viejo, Huaca Partida and Huaca Prieta and learn about the theory behind the siteâ€™s name "El Brujo" (The Warlock).
Finally, visit the Cao museum named after La SeĂ±ora de Cao, a female mummy just discovered in 206. Excavated in a highly-preserved state, the Lady of Cao is thought to have been an important ruler, as she was found surrounded by extravagant jewelry and weapons. Such discovery eradicated the idea of only men ruling the ancient empire.
At scheduled time in the afternoon, transfer to the station to take the bus to Chiclayo. At your arrival, transfer to the hotel. Accommodation in Chiclayo.
Meals: Breakfast.

DAY 5: TĂšCUME â€“ HUACA RAJADA â€“ ROYAL TOMBS OF SIPAN.
Visit TĂşcume, land full of invaluable history, tradition, customs, and archaeological wealth, located 35 kilometers from Chiclayo and is also known as the Valley of the Pyramids. The complex covers an area of 220 hectares and is surrounded by fertile crop fields. TĂşcume is a great complex where you can see 25 pyramidal Temples, and Huaca Las Estacas, Mirador, and Huaca Larga.
Tour The site museum named as the complex and explains the visitors the development, life and end of the Lambayeque Culture.
Then visit the spectacular SeĂ±or de Sipan Royal Tombs museum modern pyramidal building that houses true Mochica art jewels in its interior and keeps the remains of the ancient Sipan ruler. Finally, tour the spectacular Huaca Rajada complex composed by two mud brick pyramids and a terrace built by the ancient Mochicans. In 1978, the celebrated archaeological discovery of two pre-Hispanic tombs was made: El SeĂ±or de Sipan (Lord of Sipan) and his ancestor, El Viejo SeĂ±or de Sipan (Old Lord of Sipan), both very important persons that ruled the Valley's destiny during the 2nd and 3rd centuries of our era. With these discoveries, our admiration for the well-known excellence of Mochica ceramics was enriched by the revelation that they also produced exquisite metalwork. Accommodation in Chiclayo.
Meals: Breakfast.

DAY 6: CHICLAYO/LIMA.
Transfer from the hotel to the airport to board your flight back to Lima to take your connecting international flight.
Meals: Breakfast.

Prices per person in US dollars
Rates subject to availability previous confirmation of the reservation.
Valid to Cash Payment or via Tranfer.
IT DOES NOT INCLUDE:
Nazca Lines overflight tax
Entrance to La Calera thermal baths in Chivay
Does not include internal flights
Non-refundable, non-endorsable and non-transferable package.
Any incident presented at the hotel or in the transport is important to leave it registered at the destination. Then on your return inform the agency to proceed with the respective inquiries.
If you require an invoice, it is important to detail the ruc number, commercial reason and address when the reservation is requested.
Always consult for the maximum number of people allowed for each type of room required.
Rates only valid for the detailed dates above.
Exclusive rate for foreigners.